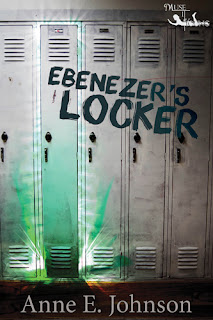 Today;s guest is author Anne E. Johnson whose book Ebenezer’s Locker was released on June 1, 2012.  Anne, I have some questions not only pertaining to your character Rhonda, but your writing process.


Marian: Rhonda Zymler is a very inquisitive sixth grader. How did she become interested in spirits?
Anne: Rhonda doesn’t have a choice. She starts getting messages on her desk, books, and other places around the school. They’re from somebody who signs his name “Ebenezer” and seems to be invisible. This spirit won’t leave her alone. And then another spirit, even more aggressive, starts trying to communicate with her, so she has to investigate, if only to get them off her back.


Marian: As an adult how did you create such a believable and interesting sixth grader?
Anne: I was once a sixth grader! Frankly, my middle-grade years are full of happy memories for me. Not that I was really popular or anything, but I was truly coming into my own as a person. I think that’s why I enjoy writing for and about ages 9-12. I was a smart and curious sixth-grader, and there’s some of me in Rhonda. But she’s more of a trouble-maker than I ever was.


Marian: Are you able to tell us how she can go back in time?
Anne: There’s only so much I can explain without spoilers, but I will say that she is sent back in time using a technique invented by one of the spirits, back when he was alive. The special technique was supposed to send someone forward in time, but an elderly psychic in Rhonda’s neighborhood figures out a way to use it for backward time travel, too.


Marian: If so, how did she change her town? I know spoiler here—just a little hint would be good? :)
Anne: Marklebury, Rhonda’s town, is suffering hard economic times. Many people have lost their jobs or moved away. Her school is in danger of being shut down. Rhonda’s adventures with the spirits have a big effect on this situation.


Marian: How did you come up with the idea for Ebenezer’s Locker?
Anne: I attended a number of different schools growing up because my family moved a few times. My favorite schools were always those that clearly had a long history. That gave me the idea to make Rhonda’s school building very old, and the former residence of a training school for psychics.
But I’m actually getting ahead of myself in this answer. My original idea was simply to write about a girl who finds something amazing in a locker. I had no idea what it would be. The story grew out of that concept.


Marian: What other projects (novel & short stories) are you working on now?
Anne: Well, first, there are other novels coming out this summer! On June 19, my noir-inspired science fiction novel Green Light Delivery (for adults) will be released from Candlemark & Gleam. In August my tween medieval mystery novel, Trouble at the Scriptorium launches from Royal Fireworks Press. I’ve just finished the sequel to Trouble at the Scriptorium, and am making good progress on the sequel to Green Light Delivery. I have a whole stack of other plots, outlines, and partial manuscripts in various genres.


I also have started a series of short-story trios for tweens, called Aliens & Weird Stuff. I published volume 1 in March, and volume 2 is coming in July. I try to write at least one short story per month, either for adults or for kids.


Marian: Will we see Rhonda again in another story?
Anne: I think so. I have some plotting done on a sequel. But I’m very busy with some other works right now. Rhonda will have to wait for a bit, but I’ll get to her as soon as possible.


Marian: If any, what lesson has Rhonda learned in her travels?
Anne: I’d say she gains some self-confidence, is reminded why her best friends are her best friends, and certainly appreciates her town and its residents more than she did.


Marian: Last but not least. What is your daily writing process to get into your characters?
Anne: I always have more than one work in progress at a time. That way, if I’m really stuck on one, I can probably manage to focus on another. Once my head is into my writing, I don’t find it difficult to focus on the characters. They’re living in my head, so I just have to let them out! 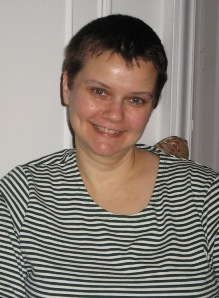 Synopsis:
A hundred years ago, Corbin Elementary School's building housed Dr. Ebenezer Corbin's School for Psychical Research. It seems that a couple of old spirits are still wandering the halls. It's up to Rhonda Zymler to find out what they want.
Ebenezer's Locker follows the adventures of Rhonda, a sassy sixth-grader who's having trouble finding her place and identity. Getting to know these spirits becomes Rhonda's quest. The more she digs, the more perilous her task becomes, and to complete it she must take two trips back in time. This story blends the realities of an economically-challenged modern American town with supernatural elements. What Rhonda finds not only gives her life a sense of purpose, but changes the fortunes of her entire town.

Thanks so much for inviting me to your blog, Marian. Your readers can learn more about me on my Website, http://anneejohnson.com/ and can get updates on Facebook https://www.facebook.com/pages/Anne-E-Johnson-Author/249053641780972


By mid-June it will be released on Amazon, Barnes & Noble, and other sites. I’ll announce this on my website and Facebook page.
Posted by Marian Lanouette at 2:10 PM

Marian Lanouette
I write mysteries with romantic elements. My first novel and the first in the series If I Fail, A Jake Carrington Mystery will be released in September 2012 by MuseItUp Publishing